Change has been the name of the game for basketball in New Zealand in 2021.

Basketball in New Zealand has had its glory days. In the 1980s the NBL exploded behind a national televised game-winning shot from Kenny McFadden, and in 2002 the Tall Blacks put the country on the international hoops map when they made the top four at the world championships in Indianapolis. And nowadays, of course, we all beam with pride over the exploits of Steven Adams on the NBA stage.

But something significant has taken place at, shall we say, a less glamorous level over the back end of 2021. In the corridors of power, the boardrooms of change, a revolution has gone down. Basketball has had a leadership refresh, and made a succession of monumental breakthroughs in the commercial and funding sector.

Where do we start? The people are as good as any. Long-serving chief executive Iain Potter has stepped away from the top job, and been replaced by Kiwi basketball icon Dillon Boucher. It is a changing of the guard, observers note, made in hoops heaven. Boucher is young, progressive, ambitious and, most importantly, almost still dripping with the sweat of the sport on his brow. He’s an NBL and Tall Blacks legend, with a history of over-achievement. Many believe the sport could not be in better hands.

There has also been a change-out at the NBL, with another dose of youthful effervescence. Broadcaster Huw Beynon has come in to assume the reins of the leagues following the departure of
go-getting, Mr Fixit General Manager Justin Nelson, who has jumped the fence to Sky TV.

But the new leaders have arrived at the right time. Following the announcement in August of $1.35 million in funding (spread over three years) from Sport NZ to implement their community Strengthen and Adapt Plan, Basketball NZ in December received an early Christmas present – a three-year $3.3m support package from High Performance Sport NZ that will finally enable them to resource the national programmes at an effective level.

This would barely make a dent on the high-performance budget for, say, NZ Rugby, or NZ Cricket, but for basketball, which has been existing on around $150,000-200,000 annual funding from the high performance coffers for an age, it is a comparative luxury.

“It’s been a lot of years coming, and a lot of work has been put in by Iain and [high performance boss] Leonard King for a long time” reflected Boucher. “It allows Leonard and his team to put together a robust plan and strategy. It allows for some real development, some real focus areas, and the exciting thing is there will be some opportunity in the 3X3 space to push this game to new heights.”

The good news didn’t stop there, either, for this sport of choice among Kiwi schoolkids. Just before the high performance windfall came the announcement of an historic five-year deal between Sky TV and the NBL – the most commercially lucrative the sport has ever had and allowing the league to forge ahead with certainty, financial clarity and a new women’s setup that will deliver pay parity.

Boucher called the Sky deal a “coup” for Kiwi hoops and admits the confluence of events sees him take the reins of his sport at an unprecedented juncture. “My mission is to grow the sport. There was already some really good stuff in the pipeline when I came on board and hopefully I can add to that now, and we can continue our huge numbers coming through the community game and now put in place processes to make our Tall Blacks, Tall Ferns and 3X3 teams successful.”

These are exciting times indeed for basketball. The sport’s challenge now will be to ride these slam-dunk successes to even better places. 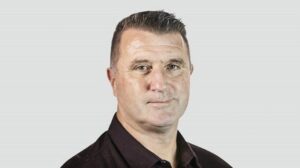 Marc Hinton is a senior sports writer, working out of Auckland, with 38 years’ experience in the media industry in New Zealand and the UK.

Born in Dunedin, he started his journalism career with the Otago Daily Times, before going on to work for, among others, the Waikato Times, The Times and The Independent on Sunday in the UK, the Sunday Star-Times and, for the last 13 years, as part of Stuff’s national sports team.

He was editor of NZ Rugby World, has won numerous national awards for sports writing, and has covered five Rugby World Cups and two Olympics.